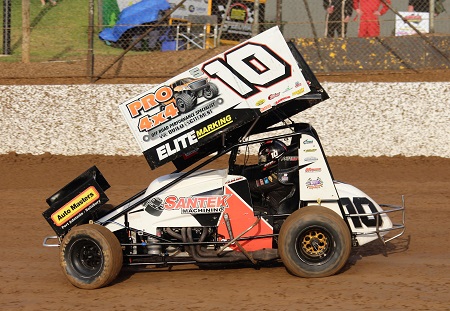 For the first time since stepping up into the Sprintcar ranks over a decade ago Steven and Mark Caruso swept the top two podium positions in a 360ci Sprintcar A-Main as they defeated Hayden Pitt in the opening Sprintcar event of the South Australian season. In what was a great finish to the 30-lap main event Steven fended off a late race charge from his older brother Mark and he went on to win by less than half a second to claim his first Sprintcar feature win in over three years.

After failing to finish both of his heat races Hayden Pitt stormed his way to third after starting from position 10 while Lisa Walker and Jarman Dalitz completed the top 5. Colin Brooks, who was driving the Ken Hutchins owned #7, faded late in the race to finish sixth after starting on the pole, while Ben Gartner, debutante Corey Sandow and John Henderson rounded out the finishers.

Broken Hill resident Brendan Guerin led the opening 11 laps of the race and had established a sizeable lead over the field until the car slowed dramatically on the back straight with an engine issue. Jamie Hendry was another driver who failed to go the distance with an engine issue while Mount Gambier’s Scott Enderl slammed the back straight wall after running just outside the top five.

Earlier the heat winners were Jarman Dalitz, Colin Brooks, Mark Caruso and Brendan Guerin. Clinton Warner unfortunately joined the select club of “Upside down on Debut” as he rolled his #36 in turn 2 in heat 4 after trying to avoid an accident involving Jarman Dalitz and Colin Brooks.

Another strong field of Wingless Sprints were on hand but despite the tough competition the top four drivers were the same as the week prior only in a slightly different order. Joel Heinrich led the entire 20-lap journey to defeat last start winner Mitch Broome, Cory Hodgson and Anthony Tapley. Kirby Hillyer made an impressive season debut to finish fifth while the top 10 were rounded out by rookie Hayden Vickers, Melissa McMillan, Renee Pestka, Patrick Monaghan and Nicole Southby.

The night also saw the opening round of the South Australian Speedcar Blackjack Series with Robert Heard keeping a clean sheet as he won both heat races in addition to knocking 10 seconds off the 20 lap track record on his way to the A-Main win over Todd Wigzell and Luke Bowey, who edged out Brett Ireland on the line.

Earlier the second heat was marred by a huge crash in turn three after Ashley Booker rode the right rear of Norm Moore send his car crashing hard into the catch fence resulting in a short delay.

For the second week in a row Carey Weston claimed the Street Stock feature ahead of Craig Buchanan and Nigel Reichstein while Michael Miller was a dominant winner of the AMCA Nationals feature over John Stumann and Frank Thierry.

Action at the Murray Machining and Sheds Speedway will resume on October 19 with the opening round of the 410ci Sprintcar Country Tri-Series with the best local drivers set to take to the Murray Bridge venue for the first time this season. Joining the 410ci Sprintcars will be a huge support program including the Wingless Sprints, Formula 500’s, AMCA Nationals, Street Stocks, Super and Junior Sedans.