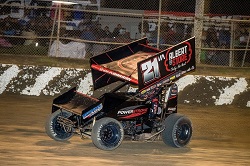 Following a season on the sidelines, Hobart, Tasmania-based 410 Sprintcar racer Shaun Dobson is raring to make his comeback at the beginning of the upcoming 2019-20 season, with his break having well and truly reinvigorated him.

Choosing to spend the past season focusing on family and business commitments, while also allowing himself to generate new passion for the sport, Dobson is looking forward to making his season debut, doing so in his home state for the first time in numerous seasons.

The 26-year-old’s return campaign will then see him travel to the mainland to compete in multiple events throughout New South Wales and Victoria, with the plan also including visits to South Australia and Queensland, before returning to the Apple Isle for the Australian Championship, which will be held at Latrobe’s Gulf Western & Independent Oils Raceway.

Not only will Dobson be running his familiar family-owned KRE 410ci powered VA # 21 Cool package, he will also be joined by regular team crew chief Shane Finch for the entirety of the season, with the pair having previously proven to be a strong combination.

“It’s given me a chance to reset and take a much needed rest in order for me to come back refreshed and with a determined and positive attitude to racing. We’ve got a fairly exciting schedule lined up and we’ll be going up against the country’s best in each of our race meetings, so we’re keen to get the season underway and get back into the swing of things.”

The remainder of Dobson’s schedule is yet to be confirmed, with the team taking each race meeting as it comes.