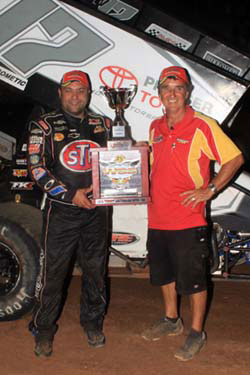 The thirty-five year old Minot, North Dakota driver ranks amongst the very top echelon of Sprintcar drivers in history and is a future Hall Of Fame candidate given his achievements during an amazing career which started back as a fifteen year old when he first followed in his father's footsteps and competed in a regional Sprintcar event. More than one hundred World Of Outlaw victories, six Knoxville Nationals Championships and four World Of Outlaw crowns later, Donny continues to set the benchmark and is widely regarded as the number one Sprintcar driver in the world today.

Supercheap Auto Archerfield Speedway Promoter John Kelly is in regular contact with Schatz and re-confirmed Schatz's planned schedule of events in Brisbane during the annual Summer Of Speed events from his office this morning.

"Donny's first event will be the International Sprintcar Spectacular on Boxing Night followed by events on December 29, January 1, 4, 5 and 8 in which he will not only compete against the very best Australian Sprintcar drivers but also a number of his compatriots as well."

While Schatz heads into every event with winning on his mind as all professional drivers do, one race in Brisbane which has taken an extra special place on his schedule in recent years is the fifty lap, $20,000 to win Australian Sprintcar Open. Donny is a four-time winner of the Open, holds the enviable record of never having been beaten in the Open and also set the fifty lap track record on his way to winning the 2009 event while also lapping the entire field!

Additional information on Donny Schatz's 2012/13 tour and the venue's Summer Of Speed schedule will be released shortly. Ticketing for these events will also be available online purchase via the Speedway's website at brisbanespeedway.com.au