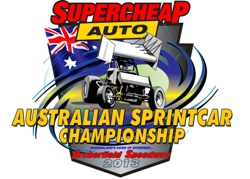 In what will be widely regarded as a forward-thinking and positive decision by the Sprintcar Control Council of Australia (SCCA) and the Australian Speedway Promoters Association (ASPA) for the benefit of competitors and fans alike, the 2013 Australian Sprintcar Championship to be conducted at Supercheap Auto Archerfield Speedway in Brisbane will be held over three massive nights of racing on January 10/11/12.

SCCA President, Mr Peter Mitchell, in confirming the much-anticipated agreement was made during a special meeting between the SCCA Executive and ASPA Members in Melbourne on August 5, highlighted a number of benefits the move to a three day event would provide, including;

• minimising the chances of some portions of the event or races being curtailed due to impending time constraints and track curfews
• allocating additional time to cover for unforeseen circumstances, unfavourable weather and any racing incidents to be attended to in the appropriate manner
• providing the opportunity for track curators to better manage the racing surface throughout the whole event
• allowing for the provision to split the field across two qualifying nights thereby allowing additional time for scrutineering, hearing of protests, Stewards reporting etc, and
• allowing additional time to ensure driver introductions and ceremonies are carried out in a manner befitting the Championship event

Mr Mitchell, while pleased with the decision to move to a three day event for all National Championship events from 2013 onwards, was also mindful of the extra sea-borne travel time involved to Tasmania for the 2014 event and with this in mind, the successful Tasmanian Promoter will have the option to revert to a two day event if necessary.

Supercheap Auto Archerfield Speedway Promoter John Kelly welcomed the decision by the SCCA and ASPA in making the 51st running of the Championship one of change.

"The move to a three day Championship is a positive one for our sport, not only for the drivers and teams who compete but also for the fans who attend the venue to witness all the action live and for those who follow the results through social media and other means."

"Staff at a number of racing venues, especially in recent years as the sport continues to grow at a rapid rate, have done exceptional jobs given the high car counts, the number of races and of course all the festivities that are part of the Championship. However the extra night of racing will ease that pressure a little bit while at the same time it will mix the fields up and add a few extra elements of excitement and intrigue to the overall Championship event."

"Certainly from our perspective at Archerfield we see it as a very good decision for all and I know a number of our fellow ASPA members agree. We're very much looking forward to hosting the 2013 Title and showcasing the very best Australian drivers in the most prestigious event in Australian Speedway."

For fans planning their travel to Brisbane for the event, Gold / Multi-Day Passes for Grandstand Reserved seating in Rows A-E on the main straight will be available for online purchase through the Speedway's website at brisbanespeedway.com.au from Monday August 20. The Gold Passes include general admission for each night of the 2013 Supercheap Auto Australian Sprintcar Championship plus a reserved seat in the Main Grandstand (Rows A-E). Seat selection is available via the seating plan during the online purchasing process.