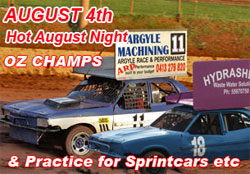 The programme for next Saturday night's Hot August Night event at Supercheap Auto Archerfield Speedway has been changed to include practise sessions only for Sprintcars, Midgets, Wingless Sprints and Modlites due to a lack of nominations from these classes.

The OzChamps events for Ford v Holden, BIS Sedans and Open Sedans, the King Of The Ring and Ladies Race plus the Ford v Holden Enduro will however proceed as scheduled with reduced admission prices for the general seating areas.

The viability of the Hot August Night event planned for August 18 is now subject to the number of nominations received from all racing classes with that decision to be made and announced shortly.

Clubs interested in competing are requested to make contact with the Speedway office no later than Tuesday July 31 while nominations may be forwarded directly to the Speedway office by calling 07 3277 7745 during business hours or by emailing [email protected] .